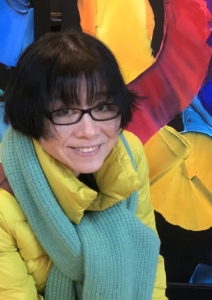 Diana LoMeiHing was born in Hong Kong, moved to Italy at the age of ten. In 1978 she graduated with High Honors in painting at the Brera Academy of Fine Arts in Milan. She has exhibited in solo and collective exhibitions in galleries in Italy and many other countries around the world since 1979. She has been included since 1988 listed as a contemporary artist in the Modern Art Catalog by Giorgio Mondadori Editori.

Even though Diana has always been a full-time professional artist, in 1982, she wrote a Chinese cooking book that was a best seller for several years in the world: “186 RECIPES AND EASY METHOD FOR CHINESE COOKING a/k/a  THE JOY OF CHINESE COOKING(Arnoldo Mondadori 1982), which has been translated into four languages ​​and reprinted in countless editions. The German edition of this book was awarded the First Prize for Illustrated Books at the 1986 Frankfurt Book Fair.

At different times in her career, she wrote screenplays and provided on-screen narration in documentaries for RAI, Italy’s national television station as well as other prominent companies.   She was also the principal actor and co-writer of UN SALTO IN CINA, a 52-minute documentary to promote Chinese culture for Swissair. In addition, she has written many articles, reviews, and poems for newspapers, magazines, books, and catalogs. She held numerous lectures and spoke at many conferences related to Chinese art and culture in Milan, Rome, and other Italian cities. She also has illustrated books and covers for several Italian Publishers and taught for courses at the Artistic Lyceum Orsoline of Milan, where she graduated.

Diana has been part of the Scientific Council of the ITALY-CHINA Association of Milan since its foundation in 1990, working actively in many artistic and cultural initiatives.  She is currently an administrator of AIAPI (International Association of Plastic Arts-UNESCO OFFICIAL PARTNER) and SpazioTempoArte.

In   1995 and 1996 Diana was hired by the KIDP (Korean Institute of Industrial Design) to help to build a textile design industry modeled on that of Italy.  She contributed many of her own designs and helped to develop developed many South Korean graduate designers.  Diana also contributed her designs to many South Korean companies,

From 2011 to 2014 she founded Association Zero, which initiated, organized, and curated a series of exhibitions and events in support of the Asian elephant in collaboration with the Museum of Natural History of Milan, The Asian Elephant Foundation TAEF, World Wildlife Fund ITALIA, and Brera Academy of Fine Arts in Milan.  Finally, Diana organized and curated a charity art auction in collaboration with the Natural History Museum of Milan, The Asian Elephant Foundation, and WWF ITALIA for fundraising to be used for the protection of the Asian elephant.

In 2015 Diana paintings were presented in solo and collective exhibitions in Hong Kong, Milan, and Brixen. Diana’s work also was included in Tour around the World with “Ballet Dancing”, a project of the Logrono Dance House in Spain.  Diana was also the Designated Artist for IMS (the International Mountain Summit) in Brixen (BZ) Italy, sponsored by BMW, Durst Photographik et al.

In November 2016 Diana spent a month of Artist in Residency in Beijing, China, sponsored by the Red Gate Gallery.

In 2017 she exhibited at collective exhibitions in Denver (Colorado) and RSG Gallery of the Portland Art Museum and Verum Ultimatum Gallery in Portland (Oregon) USA.  Diana also gave a major presentation on Chinese food and culture as part of EXPO MILAN 2017.

As a photographer, ten of Diana’s photographs were shown in a year-long exhibition at the Blue Sky Gallery of the Oregon Center for the Photographic Arts from April 2017 to April 2018.

Diana’s paintings have been on display at the RSG Gallery of the Portland Art Museum since July 2017.

In November 2017: She had two simultaneous solo exhibitions in Milan (Italy) at the SBLU_Spazioalbello Gallery and San Vittore’s Circondary House with the title: SONGS OF FREEDOM: Inside & Out.

In 2018 The Haegeumgag Theme Museum in Changwon, South Korea acquired two of Diana’s paintings for their permanent collection.  Diana also exhibited her paintings at Rovereto Tn – Italy; Denver, CO; Fall Exhibition in RSG and a two-person exhibition in 2018 and 2019 at the Ladd Building in Portland, OR.

In May 2019 Diana displayed 40 of her photographs in a two-person exhibition in Milan’s Braindense National Library- Mediateca.   This exhibition was covered nationally on RAI’s TG3.   In September 2019 Diana was featured In RAI’s program PERSONE, which covered her career as an artist, writer, poet, and proponent of Chinese culture.

Diana had a Solo Exhibition, Visions of Diana, at the Portland Chinatown Museum 2010-2021.  This was her first solo exhibition in the Pacific Northwest, United States.

Diana had another solo exhibition, Breathing Tao, at the Artreach Gallery (Portland, Oregon, United States) from November 2020 through February 2021.

Diana’s paintings are in private collections in the US, Italy, China, Korea, Macao, Switzerland, Germany, Austria, Canada, Belgium, Hong Kong, Spain, Japan, et al.  Diana is honored to have had her art collected by the late Zhao Ziyang, the Premier of China from 1980 to 1987. Her work has also been collected by Chen Baoshun and Wang Dong, each formerly China’s Consul Generals in Milan.